Microsoft and Google give people a choice

At Google we think it is important people have a choice. Last year we annouced a program to make this happen, even if you’re locked into an existing EA. Due to great success we will be extending this program.

But people have been telling us we really need to go all the way with this. So today we have some important announcements.

We think it is important people can keep using Microsoft Office when they make the switch to Google Drive. Last year we have been working hard to make this happen so you can edit files using Office Compatibility Mode (OCM).

Many companies have been asking Microsoft to have more choice on where they would like Office 365 te be hosted. Some need to host Office 365 in a private cloud, but others just want the most reliable infrastucture available. Companies have had to deal with some issues with hosting Office 365.

When Spotify annouced it was making the choice to go Google, Microsoft really understood it needed to give companies a choice. Today Microsoft annouced it will give companies a choice to go Google. Starting today Office 365 can be hosted on Google Cloud Platform, the Covered Service will provide a Monthly Uptime Percentage to Customer of at least 99.95%. To learn more about Google Cloud Platform. Sign up now for a session at the Google Office April 19th.

And last but not least. Microsoft has updated their roadmap and will make it possible to "store" Google Docs, Sheets and Slides in Microsoft One Drive. 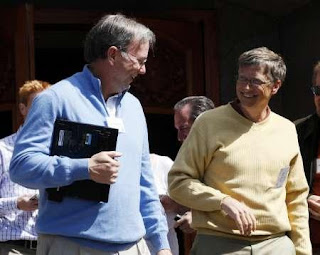 "Beginning of this year Eric and I came together and he made me an offer I could not refuse. Really happy we can give companies this choice to go Google." - Bill Gates

"Google has always been about giving people choices. It is great to see we can make this happen together with Microsoft." - Eric Schmidt

To get people up and running. Google has partners to help you.
1 opmerking: